This post was written by Agnes from Wienische Hantwërcliute 1350. I did the best to translate it myself, but since it uses a lot of technical terms specific to textile, I may have gotten something wrong. If you have any suggestions, please don't hesitate to contact me.

This year I wanted to come closer to the look of a Macedonian woman, which is why I did a few new projects for my impression. The hairband I used to wear is very much out of style in the 4th century BC. On paintings from this time you rather see a cloth or sack covering the whole of a woman's hair.

A friend of mine, who is doing a late Roman impression, introduced me to sprang hairnets, and I recommend to look at this great online presentation of the technique. The presentation is in German, but the pictures speak for themselves: http://www.teppichfreunde-norddeutschland.de/de/img/treffen/Drinkler-Sprangtechnik-09072011-72dpi.pdf

The author Dagmar Dinkler describes various pieces of evidence showing Greek women using sprang, and also tight-fitting clothes on statues (especially from the exhibition "Bunte Götter"). The patterns and forms of the shown clothes imply that they were indeed made using the sprang technique.

On many paintings, I recognized a broad band wrapped around the head, which I assumed to be a woven braid on which the sprang hairnet is fitted.

While researching later finds (e.g. from the Metropolitan Museum  here, here, or here), I discovered selvedges on the sprang nets. In her book "Prähistorische Textilkunst" Karina Grömer describes the use of tablet-woven selvedges on weaving looms as early as the bronze age. Not only does this look nice, it also makes for a stable point to start the net, and gives an estimate of the needed amount of threads - as they are limited by the length of the edge. It also introduces another nice design opportunity.

This selvedge was actually pretty easy to fabricate. I just used a normal weaving comb and instead of using the filling thread as usual I just layd large loops around a stick on one side. These loops are then wrapped around a stick and thus create the bottom side of the sprang piece. The threads are then fitted together with a simple Interlinking-Technique. Afterwards, a band is stuck through the bottom loops and they are tied together. Then the sides are sewn together so that we get a nice sack. 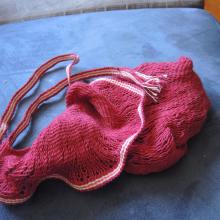 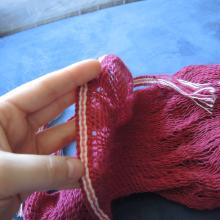 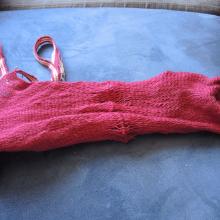 Unfortunately I overestimated the required length and the hairnet turned out slightly too large. However, it is indeed very flexible and I am able to style it in almost any desirable form. 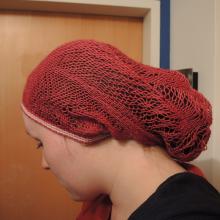 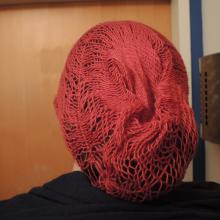 The material I used is wool dyed with cochenille. Silk would propably be easier to handle and would make for a totally different look, which is why I want to try that out some time in the future.

Here are a few pictures of my sources: 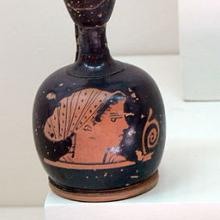 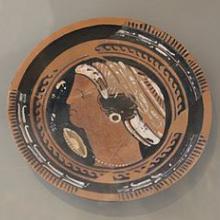 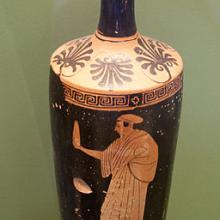 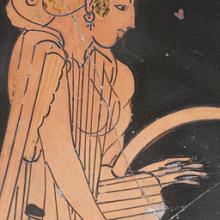