After our first experiment went so well, we were at it again to try out new Hellenisitc recipes. This time on the menu: salt-meat stew and cabbage in the Athenian way.

Contrary to last time, we did not freely interpret our own recipes, but went with complete recipes from the following book:

Salting meat was an easy method to preserve meat in antiquity. In ancient Greece, the butchering of household animals was closely connected to religious sacrifice , requiring a special butcher, the so-called mageiros. Consequently butchering an animal did not happen often, and when it did, you tried to preserve as much of the animal as possible for future use.

This recipe comes from the Oxyrhynchus cooking book, and describes how to make a stew of salted meat. As a first step, the meat is cooked in water to wash out the salt. We skipped this step, because we started with fresh smoked meat. The meat is then cooked in a soup of grape juice, vinegar, and wine. The recipe requires a lot of spices, coriander, fennel, anis, thyme, and cumin, which are all ground in a mortar, and a bit of honey. At the end we used a few slices of old bread to thicken the sauce. During the process we were quite skeptical because of all the spices, however the result is very tasty. Maybe next time we will use a bit less vinegar, because it tasted a bit sour. 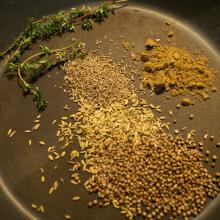 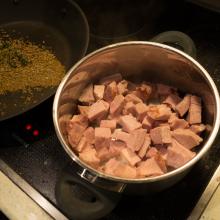 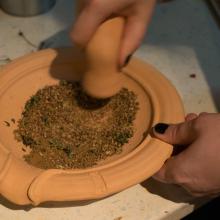 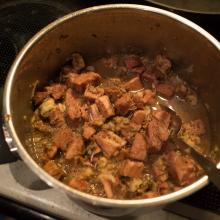 This recipe for a cabbage-salad comes from a book by Oribasius, who in turn quotes an author named Mnesitheus, who worked in 4th century BC Athens. The salad dressing is based on Oxymeli, a mix of vinegar and honey, and a bit of olive oil. The cabbage is added to the dressing alongside coriander, garlic, and a bit of  salt. That's it. And it tastes just like a modern cabbage-salad. 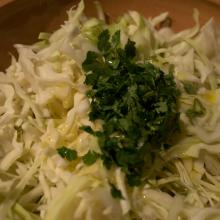 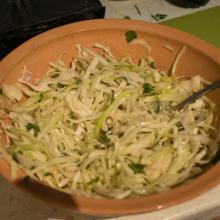 Alongside the meat and cabbage, we baked a simple flatbread. 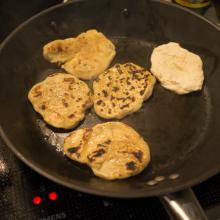 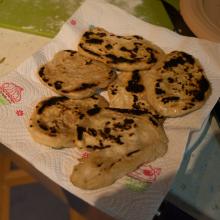 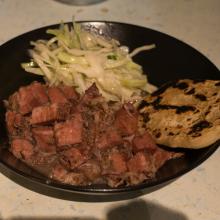 All in all this was again a very interesting sensation of taste. Next time we are going to try out honey-sesame pancakes.