This post was written by Agnes from the Wienische Hantwërcliute 1350

On the Tanagra Figurines, you can identify a special type of headdress for Macedonian women at the beginning of the Hellenism. All three of the following ladies are wearing a pointy hat above the Himation used to cover the hair. I recently attempted to reconstruct this hat. 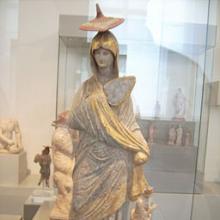 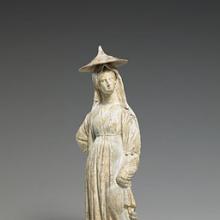 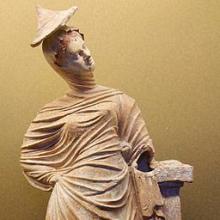 I used braided straw band as my material. You can get it from shops specialized on ropemakers or similar (e.g. here for EUR 16.00 per 50m, of which I used about 15m).

This band is simply formed to a spiral and sewn together. While sewing, you have to press the material in the correct position: pull in the direction of sewing when you want it to become narrower, press against the direction of sewing if you want it to become looser. This is pretty intuitive and comes naturally during the sewing process. I used undied linen yarn to sew.

Of course, this is just my interpretation of the construction method, the hat might just as well be braided as a whole piece. However sewing the braided band together naturally creates the slight curvature of the hat and thus perfectly matches the resulting look. 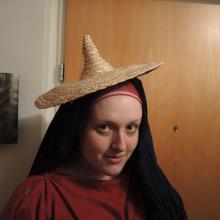 I find the result very satisfying - for my first attempt. However, I overlooked the colour of the hat in this picture, which clearly has decorations in a different colour. I can't imagine the straw being dyed efficiently with natural colours, which raises the question of how this colouring was done. Possibly the hat was worn with a painted cover, possible it was painted directly. I will test possible methods in the coming days.