The Hoplite of the Classical Period

The name Hoplite (greek Oplites) comes from the name of the armament of this heavy infantry, the Hoplon (greek Oplon). Contrary to popular belief, this doesn't mean shield, but armament in general. The correct term for the shield is Aspis.

The Hoplite was the backbone of the infantry, and the backbone of the Classical Greek military in general. As such, they had to be right in the heat of the battle. This fact is greatly reflected in their equipment. The shield - called Aspis - formed the core of their equipment granting protection for the whole torso. It measured about one meter in diameter and was constructed from wooden planks covered by a layer of bronze metal.

The left arm of the Hoplite was placed in a grip called Porpax on the inside of the shield. Also on the inside was a rope that could be used to carry the shield on the back during marches, and to get a better grip of it in combat. This extra handle was called Antilabe.

The Aspis was shaped like a bowl with a perpendicular rim, so that the Hoplite could rest the weight of the shield on his shoulder. This was neccessary, because the minimum 10kg weight of the Aspis would make parrying and keeping the balance impossible otherwise.

The front of the shield was often painted, originally with individual motives. During the Classical era, some cities or family clans started using uniform shield symbols, such as the famous L (Lambda) for the Spartans. Men from Mantineia were carrying the trident, Messenians carried an M, Syconians carried an E, and troops from Tega a T. Other cities chose symbols rather than letters, like the Theban club or the bee for Ephesos.

Added to the front of the shield was sometimes a cloth that served as a protection from projectiles and was left hanging from the bottom of the shield like a curtain. This made aiming at the legs more difficult for the  enemy and somewhat reduced the impact caused by projectiles in this area. Of course, this kind of protection also added weight to the already heavy shield and further reduced the fighter's mobility, so it wasn't employed very often.

To further protect the torso, the Hoplite would wear a piece of armor, either a bronze muscle cuirass or a Linothorax. The former often is formed like an ideal well trained male torso. Its weight greatly varies depending on the size of the fighter. The Linothorax consisted of many layers of linen, that were glued together. One layer of linen is a very soft and flexible fabric, but many layers together with the glue form a piece of armor with very good protective values. The Linothorax was closed at the sides and at the shoulders.

A helmet was worn to protect the head. Over the centuries of Hoplite warfare, the forms of the helmets also developed alongside new military tactics and doctrines. Illyrian type helmets were one of the earliest Hoplite helmets and can be divided in two different categories as early as the 7th century B.C.E. One was embossed while the other one was made of two pieces joined in the center by rivets. The second helm form used by early Hoplites is the Corinthian type, which started to appear in the 8th century B.C.E. and was still used in the Classical era, however slightly modified. Eventually use of the Corinthian type helmets spreaded to Italy, where it was used in a richly decorated form. 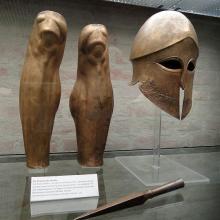 Another helmet type was the Chalkidian helmet, which had cut-outs for the ears and allowed the fighter to hear what was going on around him. The minimalistic version of a helmet is the Pilos helmet, which was just a cone placed on the head without cheek flaps or a nasal. Other common helmet types were the Attic, Phrygian, and Apulian type helmets. 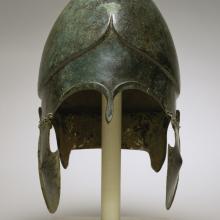 The protection was completed by greaves, called Knemides.

The main weapon of the Hoplite was a spear called Dory, which was around 2.5m long. As a sidearm he would carry a sword like the Xiphos or the Kopis.

Since a Hoplite had to buy his own equipment, it was possible that non-vital parts of the Panhoplie, like the Knemides, were omitted. However, the Aspis and Dory were essential and required for a Hoplite.

Only citizens of a Polis with enough money to afford the essential equipment were allowed to fight as heavy Hoplite infantry. The class of Hoplite citizens was called Zeugitai. En exception from this rule were the Spartans, where all full citizens were recruited and trained as Hoplites.

While the main bulk of the army consisted of amateurs, some cities also maintained a small standing army supported and paid for by the city. A prime example are the men of the "Sacred Band" from Thebes.

After the 5th century B.C.E. more and more mercenaries are used in the military, so that professional soldiers are a usual sight on the battlefield.

Citizens were prepared for military service for almost their entire childhood and youth. In most Polis, the young men are required to live in barracks for several years and train the art of warfare. After at least two years, the men are released and most cities wouldn't require them to train regularily again for the rest of their lives. Some cities, however, held regular drill under the command of a Kosmetes. The Spartans forced all men to live in warrior-groups, called Homoioi, until they were no longer able to fight.

The combat formation of the Hoplites was the famous Phalanx, which is often mistaken for the later Macedonian Phalanx used by Alexander the Great, which was a development based on the Classical Phalanx. The Hoplite Phalanx required the men to stand close to each other and cover part of their left neighbor with their shields. The overlapping shields enabled the whole formation to withstand pressure from the front and also increase the pressure on the enemy. The decisive moment in a Hoplite battle was the opening of the battle. If one Phalanx wasn't able to withstand the impact of the enemy, the battle was pretty much lost. Since most armies tended to place their best troops on the right side of their formation, the formations were often rotating counter-clockwise during the battle. The natural weaknesses of a Phalanx were the flanks and the rear, however in the Classical era it was uncommon to exploit this weakness by using light troops or cavalry. The fight Hoplite against Hoplite was called Hoplomachia and was often taught by travelling instructors.

The warriors in the front line held their spears above their heads and tried to pierce the enemy armor from above. The second line was also able to take part in the battle by stabbing over the shoulders of the front line. It is clear thet this fighting style was very dangerous for everyone involved, since a fighter could easily hit a friend standing behind him or in front of him with his spear.

When the spear was broken, the sidearm was used in the battle. Hoplites using a Xiphos would try to stab behind the shield of the enemy, while a Kopis was mainly used to slash and disarm the opponent. The main target of the attack were of course all unarmored areas of the body, like the neck, the upper leg, or the arms.