Throughout the ancient world there is a relatively similar type of garment for women, which only differs by some minor regional details. The base of this garment is a rectangular cloth that is draped around the body as a whole. The most common garment in early Greece was the Ionic Peplos, a rectangular piece of cloth that is left open on one side, rolled down once at the top, and then fixated with needles over the shoulders. It is also belted at the waist or below the breasts. The same method is used for draping the later Doric Peplos, which is closed on both sides and thus forms a rectangular sleeve. The garment is probably fashioned from light, dyed wool in plain weave. The bright colours, traces of which were found on ancient statues, rule out the possibility of linen, because dying flax with such bright colours is barely possible and the fabric would bleach out very fast. It is not known if there was any type of under-garment, but it is improbable considering the revealing nature of the Peplos. The edges are oftentimes decorated with braids in contrasting colours, which could have been sewn on or weaved in to the fabric. It is also possible that the fabrics were painted with pigments. Several forms of garment, which are generally summarized under the term "Chiton", start to develop around 400 B.C.E. The term describes a piece of garment, which doesn't need additional needles and requires less fabric compared to the Peplos. The cuff at the top (Apoptygma) disappears, and the remaining closed sleeve, which is broad enough to reach to stretched out hands, is closed along the arms at multiple places using small knots (the predecessor to modern buttons). This produces the look of real sleeves and allows different methods for draping. Over time the width of the fabric is more and more reduced and the upper edges are closed with fixed seams, while the arms are put through holes in the sides. This type of garment would allow an under-garment made of linen. Garments in the style of a tunic, with real sleeves, are known to be worn by slaves. However, it would be a great exception for a Greek woman to adopt that kind of garment. The lady in the 4th century B.C.E. usually wears a Himation over the Chiton. The Himation is a kind of cape, which can cover the whole body, if necessary. Especially adult, married women use it to cover the head, the shoulders, and the shape of the female body in public. The fabric is again light, dyed wool with a variety decorations. The Himation is a sign of social status and morals, similar to the Palla used later by Roman women. 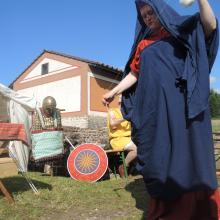 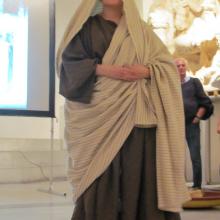 Outside the house, the hair is always put up and made into a bun on the neck or the back of the head. Additionally, the hair is held back by a band wrapped around the head or by a bonnet/hairnet to keep the hair in place. Very few women are depicted with loose strands or even open hair. 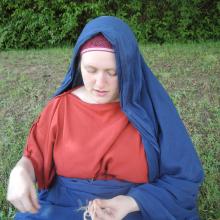 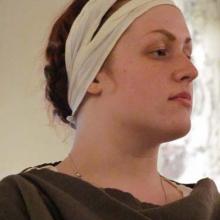