Clothing of a Macedonian soldier in the late 4th Century B.C.E.

Note: This article is dealing with the reconstruction of the typical clothing of a Macedonian soldier at the end of the fourth century B.C.E. However, all of the garments described here, are also very common throughout the Hellenistic era, and in Classical Greece, with the exception of maybe the Kausia, and Macedonian Chlamys. My listed sources are from the fourth century, however, so it is left to the reader to find sources from the other time-periods, or simply trust my word on this.

Because of the conditions in Macedonia and Greece, few traces of textiles remain as direct archaeological evidence for the clothing at the end of the 4th century B.C. There is rich literary evidence describing single aspects of a garment, such as the colour, or its’ meaning, but almost no mention is made of other interesting aspects like shape, fabric, or texture, as these would have been known to a contemporary reader. The literature only allows us to understand certain aspects of Hellenistic clothing, but is not suited to give us a complete image. In reconstructing the clothes of a Macedonian soldier, we need to rely on iconographic evidence as our main sources instead.

Early Hellenistic depictions of soldiers are mostly found in a funerary context, as frescoes or reliefs in tombs, on grave steles, or on sarcophagi. Two contemporary sources from the time of Alexander the Great stand out: the Macedonian tomb of Agios Athanasios and the Alexander Sarcophagus. The tomb of Agios Athanasios, dated to the late 4th century B.C., contains numerous depictions of soldiers, both with and without their weapons and armour. The murals are in excellent condition, and even most of the colours can clearly be identified. The Alexander Sarcophagus, also dated to the late 4th century B.C., depicts various types of Macedonian soldiers in battle, and traces of pigments can be found here as well. On the sarcophagus, some of the soldiers are shown completely naked, but this can most likely be attributed to the concept of heroic nudity in Hellenistic sculpture. Certainly it would be ill-advised for a soldier to go to battle without any armour, and the same can be said for clothing in general. 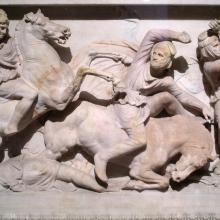 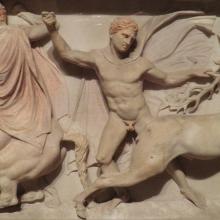 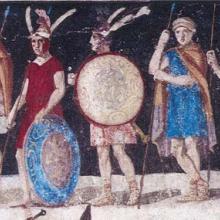 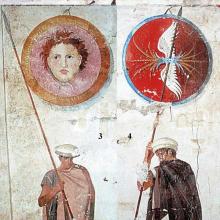 The depictions from Agios Athanasios and the Alexander Sarcophagus allow us to reconstruct a typical set of clothes a Macedonian soldier would have worn. However, it allows us no conclusion on other aspects of clothing. How many pieces of garment would an average soldier have owned? How often were they changed or washed? How and how often were damaged garments repaired? These questions can not be answered within the scope of this reconstruction.

The most common garment is certainly the Chiton. The most basic form of the Chiton consists of two rectangular pieces of cloth, reaching from the shoulder of the wearer to the shin. The pieces would be sewn together at the top and the sides, while leaving holes for the neck and the arms. The chiton would be girdled around the waist, and finally draped, so that it exposes the knees. Usually, the Chiton would be wider than the distance between the wearer’s shoulders, so it gives the impression of short sleeves, which are in fact only the protruding cloth falling down besides the shoulders. 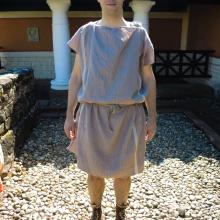 Other forms of the chiton are known, but are depicted rarely. On the Alexander Sarcophagus, Alexander himself can be seen wearing a Chiton with actual long sleeves. Besides the sleeves, the overall shape of the Chiton seems unchanged. One can imagine that long sleeves would have been particularly useful in regions with colder climate. It is also possible that the artist chose to represent Alexander this way to represent the influence of his eastern conquests on his personal style of clothing. 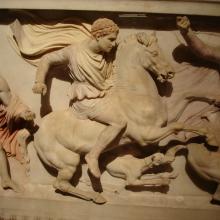 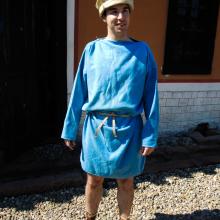 A third form of the Chiton is the Exomis, which omits the seam on the right shoulder. Instead the right side is only held together by a string or a button. Consequently, the wearer can fold the right side of the Exomis downwards, which allows him to move his right arm without any restrictions. This type of garment is usually depicted worn by craftsmen and other types of workers. But since the military life is also full of various types of manual labour, it is likely that they would be worn by soldiers as well. 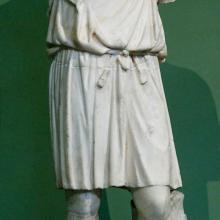 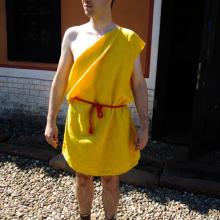 The second piece of garment, worn in almost every depiction, is the Chlamys, a short military cloak. The Chlamys is not to be confused with the civilian Himation, which is much larger and less practical. These cloaks are depicted in various lengths, ranging from the thigh down to the ankles. The length of the Chlamys would certainly depend on the occasion. If it was worn for warmth, a longer version would certainly be better. Plutarch tells us that some Hellenistic soldiers wore their cloaks in battle [1], where a long version would be terribly impractical.

Two basic shapes of Chlamydes are known: a rectangular shape, and a circular shape. The former is simply a rectangular piece of cloth, which is folded around the left side of the wearer’s body. It is then pinned on the right shoulder using a brooch or fibula. The wearer could still use his right arm, while most of his body was covered. The circular shape is also called the Macedonian type. It follows the same principle as the rectangular shape, just instead of a rectangular piece of cloth, it uses a segment of a circle. When draped correctly, the lower edge of this shape appears to be a straight line. 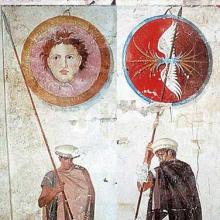 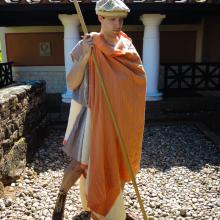 At the lower edge of the Chlamys, several small weights would be attached. Their function would most likely be to weigh the Chlamys down and keep it in place, although on some depictions, the weights seem way too small to fulfill this function. It is unclear if they served a different purpose, or if that is just an artistic oversight.

The typical headdress for a Macedonian soldier would be the Kausia, a type of rolled-up felt-cap. This cap originated in Macedonia and became popular all across the Hellenistic world through Alexander’s conquests. It’s form and descriptions closely match the Pakol caps from modern-day Afghanistan, and it can be assumed that the Pakol cap is a successor of the Macedonian Kausia, brought to Afghanistan by Alexander’s troops during his campaign.

A wide variety of footwear is depicted in contemporary art. Usually, a soldier wears boots that cover the whole foot including the leg up to above the ankle. Some boots reach even higher up the shin, halfway to the knees. Some of the boots are in a sandal-style, ranging from cut-out openings in the fabric exposing the toes, to a simple collection of strings wrapped around the foot and leg. There is no recurring type or style that can be identified in the depictions, so it can be assumed that the style of the boots would reflect the personal preference of the wearer.

Unfortunately, iconographic evidence does not allow us to draw reliable conclusions about the used fabrics and textures for the garments. Surviving textile fragments from ancient Greece are scarce, and none can be clearly attributed to garments. Most of them were used in tombs to cover the remains of the deceased, or other items of importance. Among the remaining fragments are pieces of linen, wool, and silk.One fragment of linen was shown to have 24 threads per cm. Nothing is known about the type of weave used for the fabrics, but we can assume that plain weave was known and used, since it is the simplest type.

It is probably safe to assume that the Chiton of an average soldier would have been made of either linen or of wool, as silk seems far too expensive given the contexts in which silk was found or mentioned. A variety of materials are possible for the girdle of the Chiton, including a woven woolen or linen band, a strap of leather, or a rope of hemp for example. Wool is the most likely material for the Chlamys, if we take into account its’ probable function to provide warmth to the wearer, and shelter him from bad weather. The Kausia would also be made of wool, in particular felted wool, as would other types of caps from ancient Greece. Boots and sandals would have certainly been made of leather, as it is a proven material throughout the ages, and many leather shoe fragments exist in the archaeological evidence.

Even a glance at the iconographic evidence available shows us that the clothes of Hellenistic soldiers were dyed in a wide range of colours. We can identify garments in different shades of red, blue, plain white or light yellow, golden yellow, grey, dark grey or black, and purple.

The last colour, purple, deserves a special mention, as it is often brought into a royal context by various literary sources, indicating that this colour was the mark of Macedonian royalty [2, 3, 4], or at least of their friends and bodyguards [5, 6, 7]. Thus it is highly likely that the scene depicted in the tomb of Agios Athanasios shows a royal procession, with the soldiers maybe being the royal pages or bodyguards. An average Macedonian soldier would not have worn any purple garments. For the rest of the mentioned colours, no similar limitations are known from the literary evidence.

We can see from the murals, that the Chitones vary in colour from soldier to soldier. It is likely that the wearer would simply chose the colour that suited him. Many of the Chlamydes are dyed in a golden yellow with a purple decoration. The meaning of this uniform colour scheme is unknown, but it might be an indication that the soldiers belong to the same military unit, as uniform cloaks for military units are mentioned in literary sources [1]. 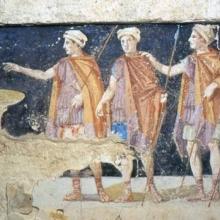 In the sources for our reconstruction, the Kausia is always simply plain white. Coloured caps are only mentioned as special gifts of kings to their soldiers and friends [7].

All the clothes in the iconographic evidence have remarkably simple patterns and decorations. Most Chitones are just plain in one colour, while few have decorative vertical stripes, similar to Clavii on later Roman tunics. Most Chlamydes have broad decorative stripes of a different colour on either the lower edge or the side edges. There is no indication of more complex decorative elements, such as embroidery, on any of the garments, although it is possible that these details have been lost, especially on the Alexander Sarcophagus, where only small traces of pigments remain.