The Argeads and the Emblem of the Radiating Sun

Aeropos, Gavanis and Perdikkas were three brothers, all descendants of Heraklid Timeneos. Herodotus tells us that they were in the service of a king in the city Levaia in upper Macedonia. The king was very poor, so the wife of the king prepared all the dishes. She noticed that the bread she baked for Perdikkas was twice as large as for the others. When she told this to her husband, he asked the brothers to leave his kingdom. The brothers asked for their wages. At that moment the sun shined through the chimney and the king said: "You can take the sun as your reward." The two brothers Gavanis and Aeropos were speechless, but the youngest brother Perdikkas said: "We accept my king," and he cut out three circles with his knife, as if he would cut out the sun, grabbed his backpack and set off with his companions. When the king saw what the boy did, he ordered his guards to follow them but a sudden storm let a river rise which prevented the arrest of the three brothers. Perdikkas overthrew all of Macedonia starting from the mountain Vermio and became the first Doric king of Macedonia. 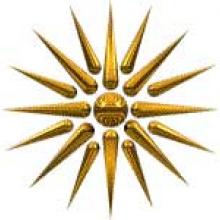 The Argeads were the dynasty which ruled Macedonia from the eighth century BC up to the year 306 B.C.E. The name Argead comes from Argos, the place of origin of the Doric tribe of the Timenids. This could be an explanation as to why the Macedonians believed to be descendants of Herakles, because Timenos was the son of Herakles. A golden plaque depicting the club of Herakles was discovered in the tomb of Vergina. It was probably a piece of jewelry on the royal armour.

After Perdikkas had caught the sun in his backpack around 700 B.C.E, he saw it as his personal property and a rightful inheritance for his royal successors. The successors kept the symbol alive in Macedonian mythology. Therefore the Vergina-Star or Vergina-Sun is seen as the likely symbol for the Argeads by many researchers. There are, however, still doubts in the academic circles that the Vergina-Sun was an exclusive symbol for Macedonian royalty. 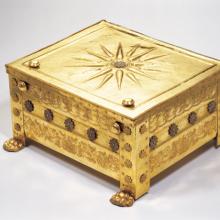 The following points have to be considered in the debate: