The idea and study of sources

In 2006 we, Thorsten Schillo and Kurt Schrauder, decided to recreate Sarissae to represent Macedonian Pezhetairoi in our club. At this point it wasn’t entirely clear to us how many years it will take, how complex this experiment would be and how many changes we will go through it during the years.

Unfortunately, as with many reconstructions in this era, details are missing in the ancient sources. Another problem arose due to the fact that the sources were distributed over 200 years, therefore possible developments of the weapon in the respective periods is very difficult to understand. The first thing we agreed was that we will build our weapon in 2 parts, according to Professor Manolis Andronikos theory. Who found in 1977 during the discovery of the Royal Tombs in Vergina weapon parts and declared them as parts of the Sarissa. Other theories claim that the Sarissa was in one piece. We decided to make the two-piece construction because of the practical reason of the modern transportation.

There are, except from a few passages in ancient sources, a couple of interesting essays on the subject such as:

In particular, Markle and Connolly are noteworthy because both had made and tested reconstructions and thus present practical advice. Unfortunately we were not aware of all text sources at the beginning of our experiment and had to do our own learn the hard way.

We used Theophrastos as the source for the length of the weapon, according to him the length was about 12 cubits, which corresponds to a length of about 5.50 meter. One problem with the ancient measurement method is that cubits were rated differently depending on whether, for example speaking of an Attic or Macedonian cubit. Also the calculation of the unit cubit seems to be carried out with slightly different factors, as it can be clearly read in Peter Connolly's essay about his Sarissa reconstruction. In the translation of Theophrastos’ text: The height of the "male" tree is in most cases 12 cubits, equivalent to the length of the "longest Sarissa". Despite this inaccuracy about the length, we agreed on the converted 5.50 meters.

As for the kind of wood, there is the popular opinion that the weapon was made of Cornel Cherry. On closer inspection of Theophrastos text, however made it clear that he does not clearly state that. He describes that the wood of the 'male' Cornel Cherry is better suited for javelins than that of 'the female'. He then states that the 'male' tree with 12 cubit is as long as the longest Sarissa, and the trunk splits at a very low level and does not grow straight. It is not explicitly said that the Sarissa was made of this kind of wood. Quite the contrary, one could even assume.

If the tree was just as big as the Sarissa but not growing straight, one could imagine that it was very hard to get shanks in the appropriate length of one piece of it. Assuming it was in one piece, not in two as Andronikos suspected. Later Roman historians on the other hand wrote that ash was the best wood for spears and purportedly one named Statius even wrote explicitly that the Sarissa was made of ash.
As previously mentioned we were lacking concrete statements from original sources and had to go with a few historical details and assumptions in our experiment.

In our first experiment, we have the following assumptions for the material 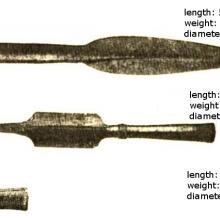 After we had acquired the materials and started with the construction of the Sarissa, we realized quickly that the shanks were prone to bending too much. It did not matter if we used a different spear head or none at all; the results were still the same.. Our results coincided with that of our sources. We concluded that the effectiveness of the weapon would suffer too much during an impact bending like this. In addition our spearheads and lance shoes were forged slightly heavier than we wanted and increased thus added to the effect. 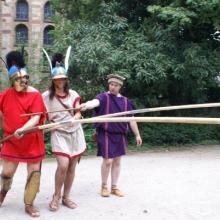 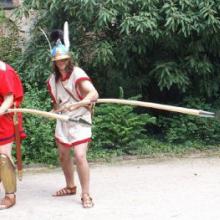 In our second attempt we used ash shafts and spout with a diameter of 4 cm. We have to make clear that a spout of this diameter was not found in Vergina; we used them to give more stability in our reconstruction. At this point we had to question of whether the design was really possible as Professor Andronikos had suspected. The exchange of the shafts did provide the desired effect in terms of the appearance of our lances. However, we found that it made the handling of the weapon more difficult. One person can feasibly control the Sarissa . When we tried with only three Pezhetairoi in formation have proved difficult to implement.

Conclusion: For us, the weapon is too heavy in this form of reconstruction. In retrospect, we have found that we have given the same reconstruction as Minor M. Markle and must share his in hisconclusion. 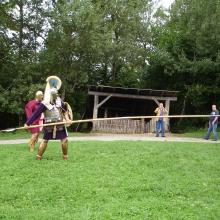 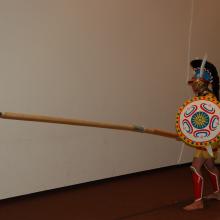 On our third attempt we initially decided that we give up the "longest Sarissa" of 5.50 meters and reduce our new reconstruction to a total length of 5 meters. We are still stayed with our assumption to use 4 inch shafts.
We forged completely new metal parts. Among other things, we adopted a smaller spearheads it was also found in Vergina. Livy describes in his book about the Macedonian wars that the Sarissa could penetrate both shield and armor. This is with a larger spearhead less possible in our experience from practical experiments.

Our blacksmith forged the lance shoe using less material compared to our first version.  As a result, the weight has been reduced and is much more comparable with the original piece in both looks and weight. 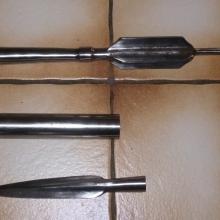 The front shaft of the two piece lance have been tapered to a conical tip. Due to the taper of the shaft, we did not only shift the focus to the rear, but also put away additional weight of the weapon, which simplifies handling.
Conclusion: In principle, all measures were made to take weight from the weapon and to make the handling easier. That step was successfully carried out in this experiment. From taking up, lowering till a swing of the weapon was the result positive using it as a single Pezhetairos. The only remaining test now is to attempt a group handling in formation exercise.

Personally, I would note that there is certainly room for improvement and much of our experiment was influenced by practical experience due to lack of original sources and finding. I hope that new researches will eventually be found in the future and more facts and details will be published about this unique weapon.