Hoplites formed the backbone of the armies fielded by the Classical Greek Poleis. In their role as heavy infantry, they were in the thick of the fighting, and their equipment reflects that fact. The core of the armament was a large concave shield, about one meter in diameter, called the Aspis. The front of the shield was usually painted, originally with individual motives, but later some Poleis adopted a uniform shield pattern for the whole army. The Hoplite is protected by a helmet, a torso armour, and greaves. The most popular helmet is certainly the Corinthian type, which was in use up to the middle of the fifth century B.C.E. It was then replaced by lighter helmets, such as the Chalcidian, Attic, Phrygian, or Pylos type. The main weapon of the Hoplite was the Dory, a lance that measured about 2.50m.

The art of fighting as a hoplite, called Hoplomachia, was often taught by wandering instructors. The Hoplites stood in a tight formation, the so-called phalanx. The warriors in the front line held their spears above their heads and tried to pierce the enemy armor from above. The second line was also able to take part in the battle by stabbing over the shoulders of the front line. It is clear that this fighting style was very dangerous for everyone involved, since a fighter could easily hit a friend standing behind him or in front of him with his spear. When the spear was broken, the sidearm was used in the battle. Hoplites using a Xiphos would try to stab behind the shield of the enemy, while a Kopis was mainly used to slash and disarm the opponent.

Related Content
The Hoplite of the Classical Period
Pictures 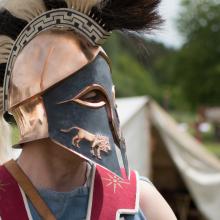 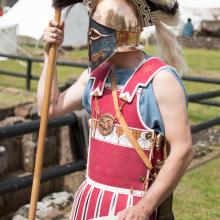 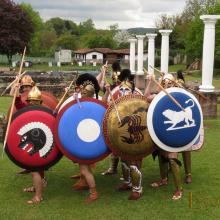 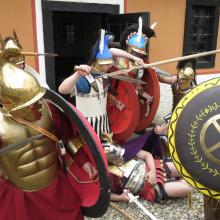 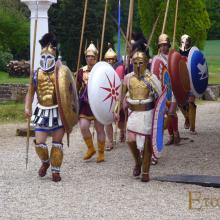 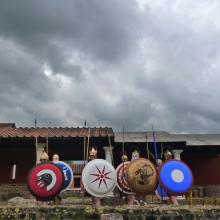 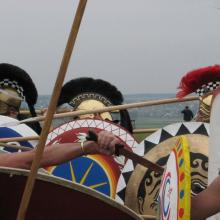 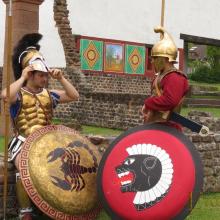