At the moment, as far as I know there are only four reconstructed versions of the Macedonian sarissa: One in Oakland University, (N. Zealand) one in Athens war Museum and two are owned by the German living history Association “HETAIROI”. From the two versions in Germany one has a Vergina type leafshaped point and the other the narrower Vegora point. Under the excellent guidance of Mr. Kurt Schraouder, from the “HETAIROI”, I learned to operate properly and safely this particular weapon

The first part of the training session had to do with me learning to assemble properly the two parts of the weapon. The weight is considerable compared to the spear and a careless move could result in injury from falling weapon parts. It is strongly advised that assembling and disassembling the weapon should be done with extreme caution.

The sarissa is transported on the right shoulder with the pieces parallel to each other taking care to have the butt spike forward and the point looking backwards. In order to assemble the weapon we carefully place the two parts vertically to the ground so that the butt spike is pinned on the soil. Then we turn both pieces in a 45 degree angle to the ground and by holding steady the part with the butt spike we slide the part with the point so as to put it in the interior of the metal joint and secure it properly.

We then raise again the sarissa vertically to the ground. It is advised the first time we do that to maintain this position for some time so as to overcome the instinctive fear that the point will fall on us. (!) I suspect that on this stage the ancient drill instructors would have carefully inspect the weapons of the raw recruits in order to avoid possible accidents. 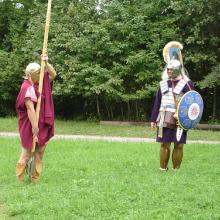 The next moves were turning left and right. To accomplish this, the sarrisa was lifted with both hands about ten cm from the ground and the action was performed. When after some time I stopped cling on the shaft my instructor told me to lower the sarissa vertically to the ground. The light breeze passing though the joints produced a sound that was unnerving to me but as time passed my stress was reduced. I was more relieved thought when the instructor told me to set the weapon parallel to the ground. 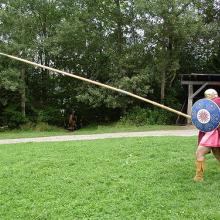 A man can turn the leveled weapon around in front of him, in a space 70 degrees wide, but this is unlikely that is could be done in the confines of the closed formation of the phalanx. The advance is performed with short steps forward and as the trainee is gradually accustomed to the weapon a light jog can be performed for roughly twenty meters.

I cannot say for certain if the ancient pike men run greater distance. I noticed that.all my action were more easily performed when I had the shield (like a counterweight) slang on my shoulder and the fins of the butt spike ease the weapon movements significantly. Accoording to me the Vegora type point is a more correct reconstruction as it weighs less and makes the piercing attempt easier. I believe my experience is incomplete as I have not yet tight pikes-formation experience.

Special thanks to my friends of the German living history Association “HETAIROI” for their kind help and support in this project.

This Article was originally published by Stefanos Skarmintzos in his Blog.