We do not know very much about the ancient game Phaininda. There only are small pieces of text describing the game, which don’t allow a complete reconstruction of the rules. These are the things we can read from them:

Reconstruction of the Equipment

The rest of the rules is lost unfortunately. Anyways we tried to create a playable version of the game by reconstructing the rules and equipment used. The size of the teams was set freely to five players each. This is small enough for the referees to overview the action, but also allows for some kind of tactics in the game. Apart from the actual players, two referees are needed to watch the game. To distinguish the teams, the players wear coloured headbands.

To contain the action it seems logical, that a marked off playing field existed. Because of the special meaning of the centerfield it is also logical to mark it in a special way. Based on these thoughts we reconstructed a possible form of playing field. 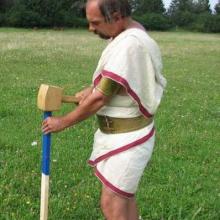 A kind of scoreboard has to be used, that the players and fans can see the current score. Here a rope is used, that is fixed between two poles. When a point is scored, a team-coloured band is fixed on the rope.

The game is played with a leather ball filled with wool. A construction guide can be found here.

At the beginning of the game each team starts in its own territory. The referee throws the ball into the centerfield. From this moment on the players are allowed to move freely in the field of play.

If one team manages to throw a successful pass from one of the outfield to the centerfield, they score a point. Passes inside the centerfield don’t count as points scored.

After a score, the team, which gave up the point, gets the ball in their own outfield. The scoring team is now allowed to occupy the centerfield, because else it would be to difficult to prevent the other team from scoring directly after the restart of the play.

If a player carrying the ball, or the ball alone, leaves the field, the team that did not touch the ball fort he last time, before it went out, gets a throw-in, just like it is in the modern game of football (or soccer for American readers). This throw-in has to be from the base-line of the teams own field.

The game ends after one team has scored a certain amount of points or after the passing of a certain time period. If the score is a draw after the time has elapsed, the next point decides the match as a “sudden death”.

Like I stated in the beginning, conquering the ball could be an extremely brutal matter. One can read from the sources that just about any form of unarmed combat was allowed to prevent the opponent from passing or catching. But because we play the game as a hobby, we invented the following restrictions:

As a general rule, the game should be fun for all participants and one should not use any other methods, where anyone could get hurt. If any dangerous situations should arise, the referee can stop the game at any given time. This also happens, when the players are piled upon the ball after a takedown and no one is able to get the ball out. The referee uses a small horn-pipe to signal game breaks.

The reconstructed game was a great success with the audience and also great fun for the players. Although a large part of the rules are freely invented, the action gives a nice impression of how this ancient game might have looked. Here are a few impressions from the first documented game of Phaininda in well over 1500 years. Team Thrace in blue defeated team Macedonia in red with a score of 12:09. 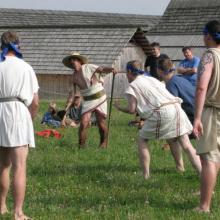 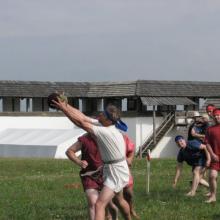 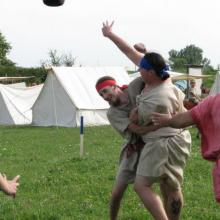 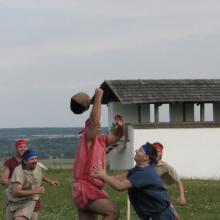 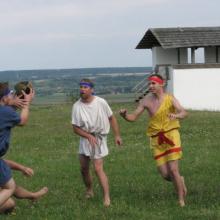 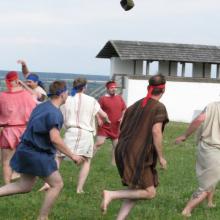 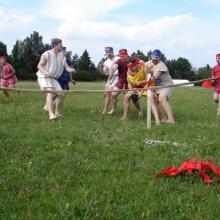