NB: most of the photographs were not digital and I had to photograph them so I could use them. Thus some are distorted and the angles come out wrong

The helmet I got is a late Corinthian from Deepeeka, acquired from Albion Armourers.

It already had a felt and leather lining which I didn’t want to rip out, so I had to utilise the existing holes in the helmet bowl to attach the crest, rather than soldering extra loops on, which would have been more authentic.

After looking at some ancient art I decided on a crestbox to crest width ratio and produced a template from cardboard (picture 1) to give an idea how the finished crest would look on the helmet and also to aid with the cutting of the crest box. 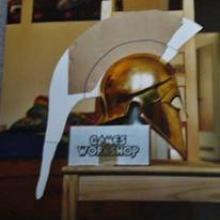 The first attempt I made was with wood but it became clear rather quickly that neither the glue nor the wood are strong enough to bear the stresses put upon the piece when being filled with hair.

The second attempt was therefore with brass sheet, 1 mm strong. With the aid of the template I cut out the two sides with one of the small sides and a tab attached which were the folded as can be seen in the second picture. These were then hard soldered together. 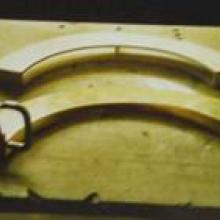 Between the two sides I soldered some spacers made from brass rod to keep the distance even and avoid bulging when being filled with hair (picture 3). 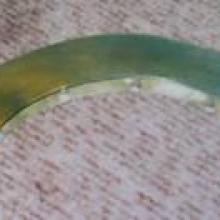 Then came two brackets with a hole each in the inner curve that sits on the actual helmet and one hole on the outer and upper curve. These sit on the same line as the holes in the helmet crown and are for attaching the crest to the helmet with the two pins shown (pictures 4, 5). 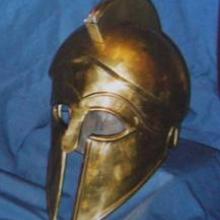 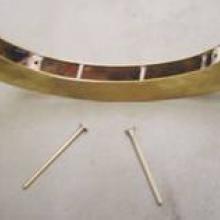 The pins are inserted from inside the helmet through its two holes, then through the holes of the brackets. The top part of each pin is slotted and a wedge through the slot holds the pin and thus the crest in place.

With all the soldering now complete I cleaned the finished crest box. Then I took a file to the inner curve of the box to make it sit as snug as possible on the helmet. With that done the crest box was sanded and polished.

To fill the crest box I bought some black horse hair. One bundle normally would be sufficient. I first set some of the entire length aside for the tail (picture 6), then chopped the remaining hair into three bundles of equal length. Actually before you do that I recommend washing the hair with shampoo; I had to sneeze all the time when working on it before I washed it. 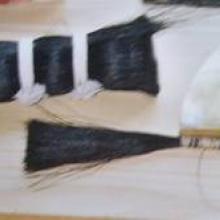 From the three bundles I formed small bundles and tied of one end with thread. The thread shouldn’t cover more of the hair than what would be inside the crestbox. However with hindsight the hair should be kept at twice the length, ‘folded’ in the middle and then tied together at the folded end with some thread going through the fold. That secures single hair from falling out or getting ripped out. In my case I simply used more glue on the bottom end when inserting the bundles.

I kept bundling and inserting/gluing in parallel as the glue needs time to dry. When you ram home one layer you don’t want it to dislocate the previous layers. My hair bundles were sized so two could be squeezed in next to each other. Between one layer and the next I glued a small wooden wedge to space them out a little and change the angle to follow the curve. I started at the front of the crestbox (picture 7) and worked my way to the back but stopped about three inches short. 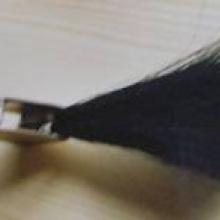 Next I started from the back by inserting the tail (the full length strands separated at the beginning) and then worked towards the front to fill the gap (picture 8).

When the entire crestbox was stuffed I generously put some extra glue on the bottom ends of the hair bundles to avoid single hair falling out. Afterwards I glued a strip of leather on the underside of the crestbox both to protect the bottom but also to improve the grip on the helmet. Finally I trimmed the actual crest so that the length of the individual bundles was as even as possible. 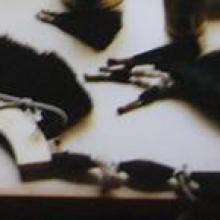 Hindsight is a beautiful thing: the crest turned out really thick and luscious but it also is rather heavy. In a revised version I would go a bit lighter on the stuffing and use less hair which would make the helmet a bit more practical. Still, it looks quite beautiful. 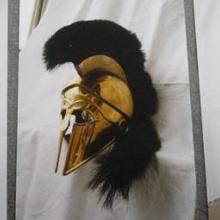