The Ekdromos was a variation of the Classical Hoplite, who was armed in a lighter fashion. The name translates to out-runner, which allows us to infer their tactical use. Ekdromoi could fight in the closed Phalanx formation, just as regular Hoplites. However they could also quickly break ranks to run down fleeing enemies, or engage skirmishing troops in close combat, or at least drive them off the battlefield. Ekdromoi were typically armed in the same fashion as Hoplites, with the large concave shield, the Aspis, and the Dory, a lance about 2.50m long. They would have only worn a helmet for additional protection, because a torso armour and especially greaves would greatly hinder them while running.

In the armies of most Poleis it was up to the individual soldier to purchase their own armament. We can safely assume that the role of Ekdromos was performed by citizens, who were not able to afford a full set of Hoplite panoply. 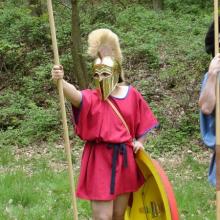 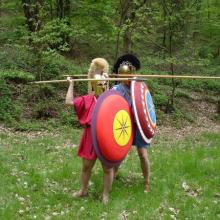 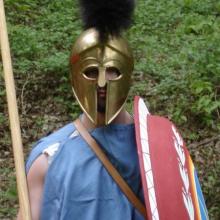 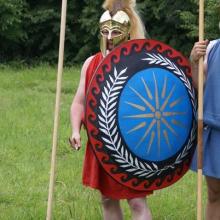